INCREDIBLE BENEFITS OF DRINKING WATER FROM COPPER VESSELS AS PER AYURVEDA 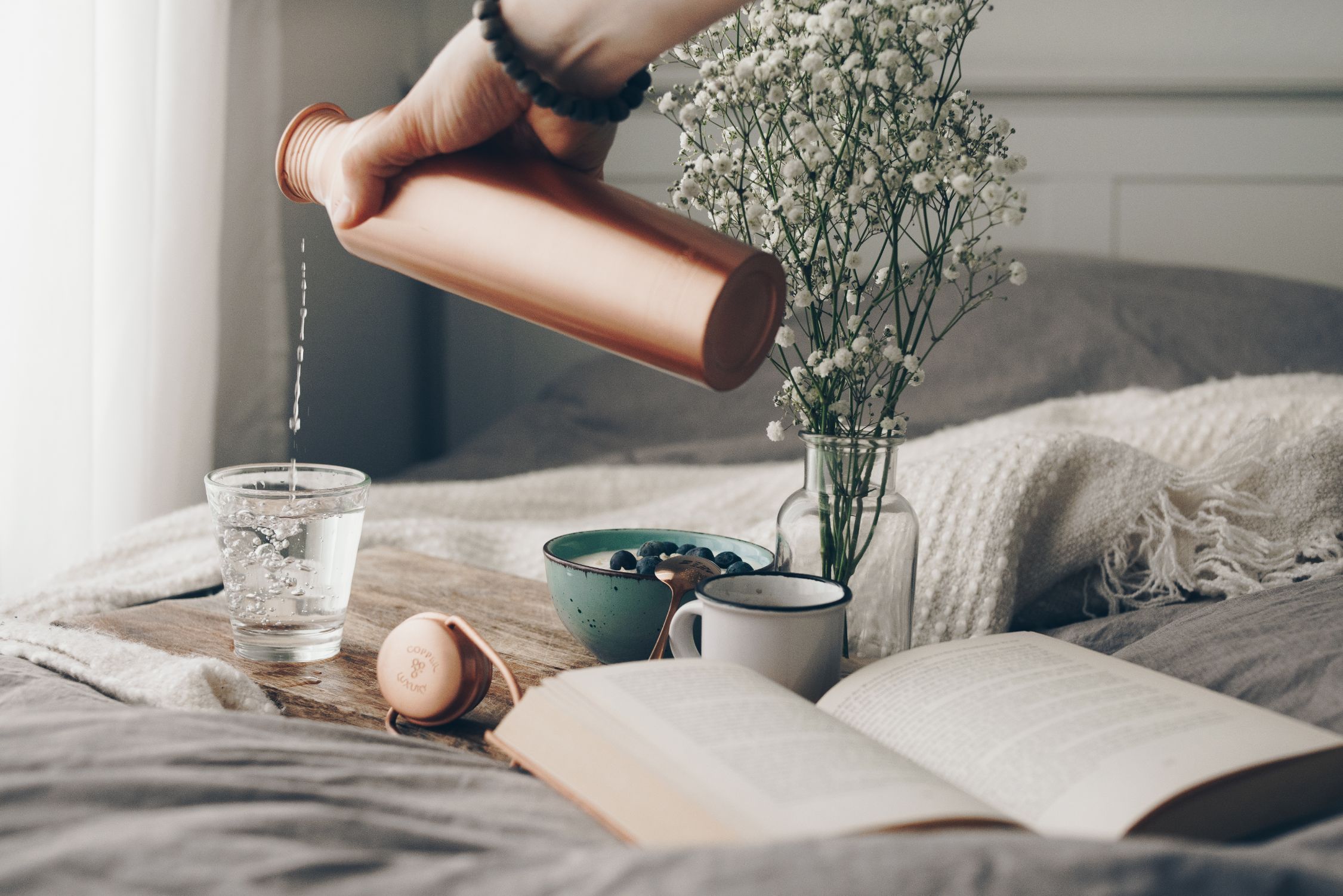 Copper is naturally self-sterilizing and has a toxic effect on pathogens that come in contact with it. It destroys even antibiotic-resistant bacteria or “super-germs” such as MRSA. Store potable water in copper vessels overnight and drink it the next morning. It negates infection-causing bacteria and also aids in digestion, healthy skin and hair, healing injuries, and aids sensory flow via the nervous system. In China, it is called “qi,” the symbol for health. In Egypt it is called “ankh,” the symbol for eternal life. For the Phoenicians, the reference was synonymous with Aphrodite the goddess of love and beauty. These ancient civilizations were referring to copper, a material that cultures across the globe have recognized as vital to our health for more than 5,000 years. No wonder that in India, yogis and Ayurveda followers have been drinking out of copper containers for millennia. Even in Europe and in the United States, copper lines are being used to carry our drinking water. Copper is a natural, passive, antimicrobial material. It can self-sterilize its surface without the need for electricity or bleach! Ayurvedic use of copper vessels dates back many centuries, and it is among the oldest examples of practicing preventative natural health. It was observed that people drinking water from copper vessels tended to recover from an injury faster and more completely than expected. Ancient Egyptians used copper vessels to keep water fresh. They had observed that copper was a good material for storing water, and realized the natural health benefits of drinking water stored in copper vessels. It was also observed that animals drinking from copper vessels and plants watered with copper-rich water were healthier than those that didn’t. Scientists have now discovered that copper ions can kill harmful bacteria, a capability not found in any other metals. Findings suggest that copper vessels are lethal to organisms such as: E.Coli, Meticillin-Resistant Staphylococcus Aureus (MRSA), Campylobacter Jejuni, and Salmonella. Copper can act on these organisms under different conditions, whether it is the water pH or temperature. Safety of leached copper does not appear to be an issue since studies have shown that the current WHO guideline of 2mg Cu/L is safe, and the levels leached in the study were 1/20th of the permissible limits, making it safe for drinking. Another study showed that E.Coli bacteria survived over 28 days on a stainless steel surface, but were completely killed after only 90 minutes of contact on a copper surface! Modern science calls this the oligodynamic effect the inherently toxic effect of certain metals on pathogens. Placement of copper objects in intensive care unit (ICU) of hospital rooms have shown to reduce the number of healthcare-acquired infections in patients by more than half. Due to the many ailments that copper deficiency can cause, it makes sense that by supplying it in sufficient quantity may reverse these ailments. Below are just a few of the health benefits of drinking water from copper vessels. There are too many to list!

Copper leached into your water can synthesize phospholipids that help in the formation of myelin sheath (nerve coating). This helps the neurotransmitters to transmit signals faster and with more efficiency. It improves brain function and health, acts as a brain stimulant and can prevent seizures due to its anti-convulsive properties.

One of the main reasons for premature greying of hair is due to deficiency of certain minerals such as copper. Copper is essential for producing melanin, the pigment that gives color to your eyes, skin and hair. Lack of melanin can also cause irregular pigmentation on your skin.

Due to copper’s strong anti-inflammatory properties, drinking copper-rich water can provide relief to arthritis and joint pain. It has also been shown to be beneficial for reducing headaches and fatigue. As copper is also a mineral that is needed for bone-building, it helps reduce deterioration and inflammation of bones that can lead to osteoporosis.

Copper ions in water help to maintain a good balance of pH level in the body, making the body a conducive and healthy environment for beneficial bacteria, and toxic to harmful bacteria. It helps eliminate discomforts such as acidity and can reduce gas and bloating. Drinking copper-rich water has also been reported to be beneficial for digestive issues and healing for intestinal ulcers.

5. Reduces the Risk of Cancer And Anti-Aging

Copper is an antioxidant and has anti-carcinogenic properties. Due to its strong antioxidant properties, it can neutralize free radicals and toxins in the body that are causing damages and cell mutations (cancerous). Antioxidants in copper can also help to slow down aging in your body, and your external appearance. It promotes healthy cells regeneration, reducing your fine lines and wrinkles. Having enough copper in your daily diet can keep you looking younger for longer!

Copper helps minimize oxidation of LDL cholesterol, reduces plaque buildup in arteries and prevents hardening of the arteries. It helps regulate blood pressure, heart rate and triglyceride levels. With these benefits, blood flow to the heart is improved and circulation is enhanced. We know that when blood circulation is efficient, blood is able to carry nutrients and oxygen to all parts of the body, preventing the numbness and tingling feeling you may feel on your fingers and toes.

7. Quicker Healing Of Wounds and Infections

Due to copper’s anti-inflammatory and antibacterial properties, it helps stop an infection in its tracks for quicker healing. As were shown in various studies (see references below), copper is able to destroy many types of bacteria including E.Coli, MRSA and Salmonella. Its ability for cell regeneration also helps ensure speedy tissue-healing of wounds.

People with thyroid diseases are often found to be lacking in copper in their body, and this is commonly seen in hyper and hypothyroidism. Copper is an important trace mineral that the thyroid gland needs to function optimally, thus a deficiency can cause the thyroid gland to go out of sync. Regular consumption of copper-rich water helps make up for your copper deficiency and improve your thyroid function.

People who are anemic may experience symptoms such as fatigue, muscle aches, shortness of breath, dizziness, tingling or crawling feeling in the arms and legs. Copper is needed for efficient utilization of iron. Iron is essential for blood-building and keeping anemia at bay. It helps keep a good level of hemoglobin (iron) and regulate its flow in your blood vessels.  Copper also helps improve white blood cell count. We know that white blood cells (leukocytes) are the cells of the immune system that are involved in protecting your body against infectious and foreign invaders. Having a high count of leukocytes means having a strong immune system that is able to fight against harmful and disease-causing microbes. 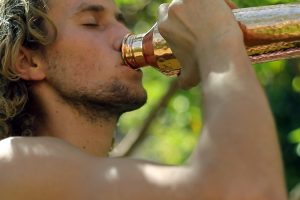 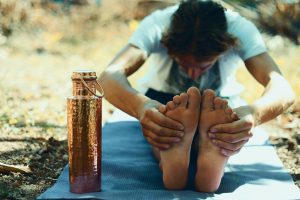 AYURVEDA THE SCIENCE OF LIFE What is Ayurveda?  Ayurveda is the time-tested,... Continue reading 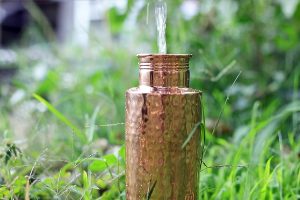 HOW TO PREPARE TAMRA JAL / COPPER WATER Copper is an essential... Continue reading

Don’t miss out on new products and exclusive promotions